After the last few posts about the World Food Summit, I thought I’d blog about something closer to home. I can cook is a BBC programme* that shows young children cooking. They cook real food in a cheerful kitchen and then eat it. Simple!

There are many things to like about the show: 5 kids and the presenter make the same dish so you can see that each of them makes it in a different way; and each kid is praised for the work they’re doing. They use raw egg in some shows, and use blunt-nosed kitchen scissors in others. The recipes are child-appropriate, although one minor worry was the fish triple decker smothered in a layer of ketchup, with its salt and sugar content. (Ha! I should talk … my daughter mainlines the stuff)

I’m most impressed with the I can cook garden, where they take the kids out to collect an ingredient. Am envious of their nice raised beds and greenhouse.

Today’s recipe was for savoury bites. The daughter and I had just made scones, so it was interesting to show her that some of the recipe was the same, and how they used chives instead of sultanas and sugar. I really like their way of describing mixing the fat and flour as tickling the flour.

Our scones turned out well, using rice milk and stork instead of cows’ milk and butter. Taste great with home-made jam, too. 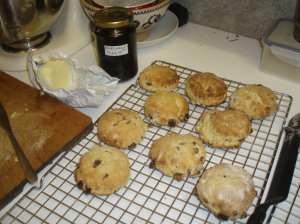 Search for I can cook on BBC iplayer

* It’s actually an Endemol programme for the BBC, but I won’t quibble.