There’s a small triangle of sloping ground near my folks’ house, between the railway station and the access path, where several trees have been planted. Not sure how long the trees have been there – at least a few years – and the staking hasn’t been removed. It’s really started to bug me that the straps are digging into the trees, and will eventually kill them off. So when we were over yesterday for the last time before the folks move house, I had a last chance to help the trees out.

The first thing to consider when working with trees is: work safely. Before starting work think about where your escape route is if stuff starts to go wrong. But when you’re balancing on one leg, on a 30 degree slope slippery with rain, wearing trainers and using secateurs, there’s only so much that a good escape route is going to help you with :)

By the time a tree has outgrown its support, the roots should have taken. But I was still worried that removing the stakes would make the trees unstable. After cutting the straps on the first tree and having the stake fall out in my hands, rotten at the base, I was less worried.

the stake was rotten at the base 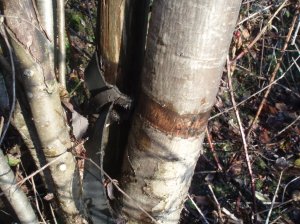 the worst damage: rotting bark by the stake, bulging bark above and below the strap

I managed to cut the straps off 4 out of 5 trees. Thinking about it, the one I couldn’t complete had many smaller saplings growing from the base. I wonder if the strap was restricting the leader, so buds lower down the plant took that as a cue to come to life.