Just worked up a small planting plan for the daughter’s nursery school. They want to be able to plant a couple of things each term, so I’ve had a look through Joy Larkom’s Grow your own vegetables and Dominic Murphy’s The playground potting shed and worked out what fits into the nursery term structure.

Incidentally, I found “the playground potting shed” as a hardback for a quid because the paperback had just come out. I’ve had a skim of the book & it’s a nice read but it’s from Dorset — significantly warmer than here and also with different terms to the Scottish educational system — so I couldn’t carry the examples over wholesale.

The first constraint is that the Summer term ends at the end of June. That’s not long after the hungry gap, and certainly before the main crops are ready. Secondly, I’ve chosen a plan which has the vegetables ready in the same academic year as they are planted. If this was relaxed, it might be easier to plant seeds in the Summer term and then harvest in Autumn.

This is where a discussion with the school staff will firm up the plan. The point is that I’ve created a plan as part of the school’s Eco schools Scotland programme (and I’m very glad I don’t have to tie all the points into their big-A, big-P Action Plan). Plenty of time for fine-tuning the growing plan as the year progresses.

Here’s a scan of the plan: 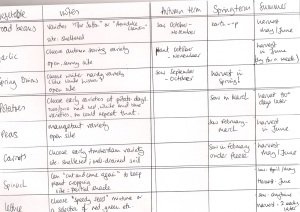 The timings look OK as long as there’s not another severe Winter. There’s also a variety in the things the kids are planting: a seed potato; a clove of garlic; big seeds and small seeds; green, black and white seeds; round seeds and elongated seeds. I’ve had many interesting discussions with the daughter over seeds; long may it continue!