The debate about the level of forest cover in Scotland continues in last Sunday’s Herald (free registration required to read). It’s an interesting article that lays out an argument for grant-assisted softwood forestry to be incorporated into farming. However, I take issue with this:

the push for ever more broadleaved trees and native scrub, while pleasing to the eye of conservationists, has little or no commercial value: it is softwoods, such as Sitka, that create jobs and income.

This may be the case at present, but one shouldn’t accept the current market conditions without considering any alternative. Reforesting Scotland aims to promote a sustainable forest culture and economy in a well-forested land, and does so by promoting both softwoods and broadleaves.

A nice blog post about gardening and learning: the right to make mistakes

spent some time in the garden with the girls, sowing some climbing French beans in modules. Sowed 20 (12 for the allotment, a few for the garden and a couple of spares) today, so I should be able to get another sowing in before the end of July. 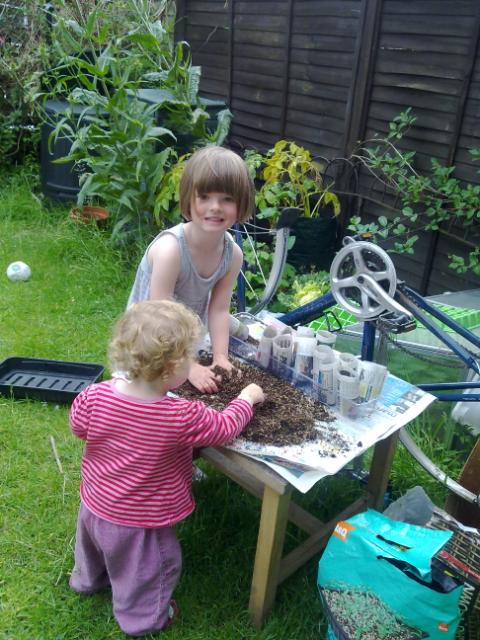 Any comments on the logos would be helpful. Ta! 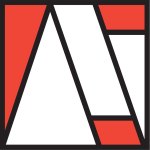 I’m a fan of Carolyn Steel, and am really delighted that she’s scheduled to present the Patrick Geddes lecture on 8 June. Carolyn’s book The Hungry City has a website, and you can see more information on the lecture here.

Cycling back from the lock-up in Bonnington, I took a wrong turning. It was very nice to cycle along past the Warriston allotments, then a right turn and along Goldenacre Path towards Five Ways Junction and back on track.

It looks like Goldenacre Path is an old railway path: there’s steep banking to both sides and the path is dead straight. I started to have a strange feeling. The vegetation on the left-hand bank was a bright green. Slowing, I started to see that it was a single, low-lying plant that was covering much of the exposed banking. A more mixed vegetation was in evidence on shaded areas of the bank, with nettles, bluebells, cleavers and an array of other plants slugging it out. But on exposed areas, the uniformity of the ground cover worried me. 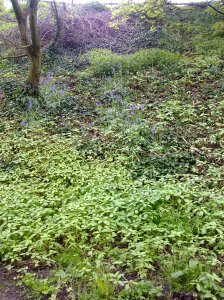 Slowing down, I recognised the triangular arrangement of the leaves: Himalyan Balsam.

The stem is very fleshy.

These are young plants which have germinated synchronosly. Wait until the summer and they could be 3 metres high.

Have arrived for a week’s holiday in Rome. Spent a quick hour at the plot on Wednesday evening planting 3 heads of garlic (Arno) and some potatoes (19 fellside hero; 7 charlotte), then we left on Thursday morning.

My horticultural task for the week is to get to La Sapienza’s Botanical Garden. It’s got a wonderful area or culinary and medicinal plants, and I hope to get a guided tour of the site. Watch this space!

At North Queensferry today with elder daughter, and spotted this nice combination in front of a SE-facing wall. We’re just over the road from the harbour, so the air will be moist and salty. The wall provides some protection from the wind. It’s certainly a good location as the strawberry leaves are looking lush.

The Grassmarket Community Project held a session today to help people fill in their census forms, so there were interesting and varied discussions about the merits of recording such data.

A very interesting point was passionately made by one of the other guys, who argued that the census is a missed opportunity to canvass opinion on how to determine local needs. This argument reminded me about the first statistical survey of Scotland 1794-1825, in which parish ministers across Scotland were asked a series of questions about their parish, and returned their answers and observations. Was this a survey for determining local needs?

I’d previously read the account for where my mum lives, so was able to recall a bit about that section. Now, I took the opportunity to visit the Central Library and look for the account of the parish where the guy lives. Interesting enough for me, but it really resonated with him and turned out to be a good way to put this years census into context.

The parochial statistics were compiled into county tables, and from there into a single statistical account of Scotland. This overall analysis was published 30 years after the original surveys were sent out! I fail to see how that could be used to accurately determine local needs.

On the other hand, the “Analysis of the statistical accounts of Scotland” by John Sinclair (1825) has a great wee essay On the advantages of statistical inquiries which lays out arguments; in particular it argues that it is impossible to establish solid general principles without the previous study of particulars, and that authors who neglected to investigate the internal structure of communities would produce more speculative argument than practical advice. This is the nub of the matter, and concerns me: the census is about static qualities of individuals and households; it’s not about the interactions between individuals, households and communities.

Enough speculation! I’ve got the Analysis out of the library, so I’d better go an read it before pontificating more.

You can view the parish statistical accounts here

Hans Rosling’s The Joy of Stats is on telly again, on BBC2 late on Thursday!, and I expect it’ll be on iPlayer afterwards. A must-see!

Hans Rosling is also on ted.com. Here’s his talk new insights into poverty

The elder daughter is staying with grandparents this weekend, so we’re having a relaxed Saturday morning. A thud of post on the doormat, and two more gardening magazines arrive. It’s gardening in the widest sense of the word, as these magazines are Permaculture Works Spring edition, and the Reforesting Scotland journal.

Permaculture works is the house journal of The Permaculture Association and always has a good mix of articles, news and case studies.

Earlier on in the week, the Royal Caledonian Horticultural Society 2011 journal. This is a more traditional horticultural society, and almost all of the articles in this journal are about ornamental plants. There is a short review of the wonderful Impressionist Gardens exhibition at the Museum on the Mound last year, and a piece on accessible gardening, but apart from that there’s not much to my interests. Guess it means I can get out to the plot instead of ploughing through another magazine.

Next things on the plot are to plant first lot of potatoes, and I’ve got some spring garlic to plant. The most exciting task, though, is to plant some willow. At the RBGE last weekend I was given three cuttings of Light Dicks willow, suitable for basketry. They’ve been in a jar of water since Sunday and are already starting to grow roots and buds. Amazing stuff!

Here’s a picture of a cutting:

and here’s a picture of the plant in June, courtesy of Slimbridge Wetland Plants