Last harvest from the allotment today: 3 kgs of Fellside Hero potatoes that had been sitting for a while. The tubers are quite small ‘cos the shaws got damaged just as they were growing, but I’m hoping they’ll still roast well.

Harvesting the spuds cleared the one of the big beds, which I had hoped to fill with alliums but the stock I had wasn’t enough. I usually buy from Garden Organic so I expect a certain amount of stuff from an order and I guess I wasn’t paying attention when I bought Taylor’s stock. 1 head of Lautrec Wight garlic only had 6 cloves, when I usually expect 10 cloves per head; and there were 40 usable Senshyu Yellow onions in the pack, when I expected 120 onions in a pack. Anyway, shouldn’t grumble, caveat emptor and all that.

That only took up a third of the bed, so I planted 40 Super Aquadulce broad beans in the remainder. Bang goes my grand plan for keeping the big beds in a formal beans, allium etc rotation, but it gives me more space to follow the Permaculture Association’s mixed vegetable polyculture research programme. You can see some photos of last year’s trials here, and a progress report is here.

There are still places left on this course, so why not spend a weekend at the Royal Edinburgh Community Gardens getting to know the permaculture design method? The RECG is an interesting project which sits in 15 acres of once-derelict hospital grounds. It’s now in its second year, so there are some parts that are well established. Should be an interesting backdrop to learn about the permaculture design principles: earth care, people care and fair shares. 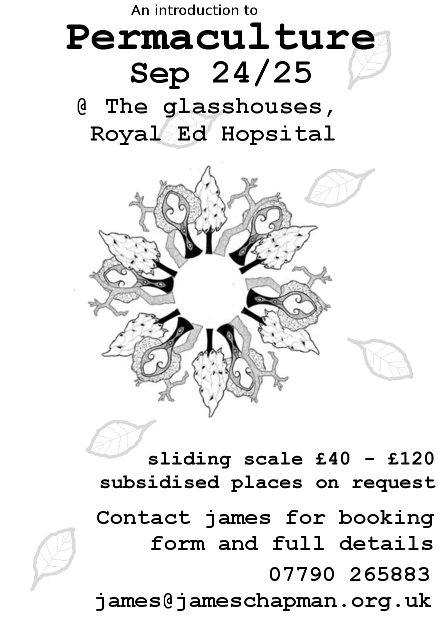 Friday’s episode of the BBC series Natural World was titled a farm for the future — how a farmer’s daughter goes back to the farm and learns how people have reduced the oil input and maintained yield. She rounds up several interesting permaculture schemes and low-energy crop systems.

Here’s the lessons I picked up:

There are 23 days left to watch it… please do!

The local green group is having its AGM at our flat tomorrow, so I’ve put together a programme of youtube videos about transition towns and permaculture, lasting an hour. We’ll mix and match depending on the group that turns up; perhaps you’re interested in the clips…

Rob Hopkins kicks off with an introduction about climate change, peak oil, transition towns, and the Kinsale Energy Descent Plan.

When Hopkins came up with the energy descent plan, he was teaching a 2-year permaculture design course at Kinsale, so here’s Bill Mollison’s quick definition of permaculture. Nice pics of spiders, too.

Cuba lost its cheap oil imports when the Soviet Union collapsed, and this Special Period is an example of what could happen when oil becomes unobtainable. This is a samizdat clip from BBC’s Around the world in 80 gardens, so I’m not sure how long it’ll stay up.

More Australians in Eat the suburbs: Gardening for the end of the age of oil.

David Holmgren (another permaculture pioneer) talks about the endurance of suburbia.

And finally, here’s talking heads from the first Scottish Transition Gathering in July 2008.

First time at the allotment this year on Sunday, and it was very cold. Too cold to dig (thankfully) but there were some signs of life: birdsong, and small shoots of the onions and garlic. Nothing from the broad beans yet.

Started to build a no-dig bed with the cardboard left over from presents. Took a full load on the bike… 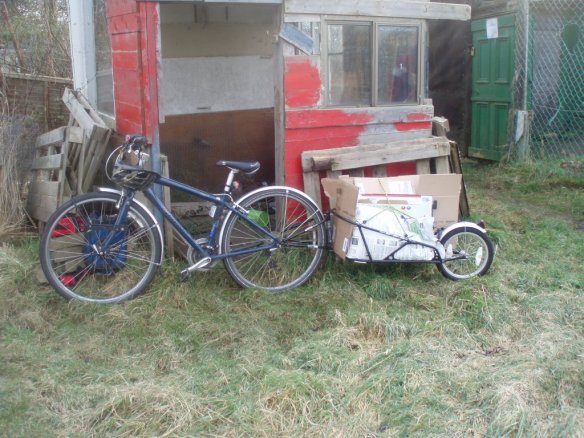 Bike with trailer full of carboard 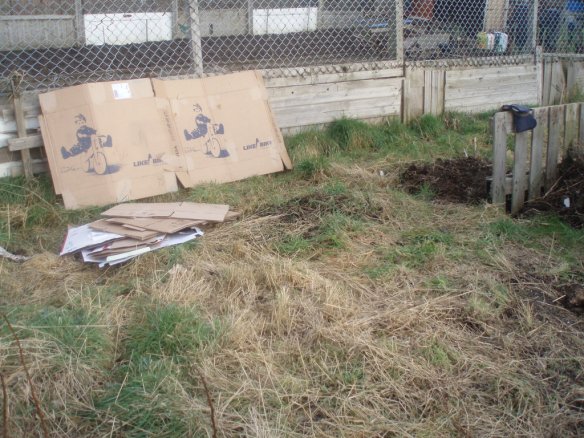 Cardboard left over from presents

… but that didn’t actually make a very large bed. Ironically, the evening after I did this, my partner decides to get rid of 2 square metres of cardboard, and today I notice that a local shop put a load of cardboard out for recycling.

First, the cardboard from family and friends; then a layer of manure from Gorgie City Farm; finally a liberal covering of leamould that the council drop in the Saughton Mains site. Now to wait for it to cook, and decide what I want to put in there. 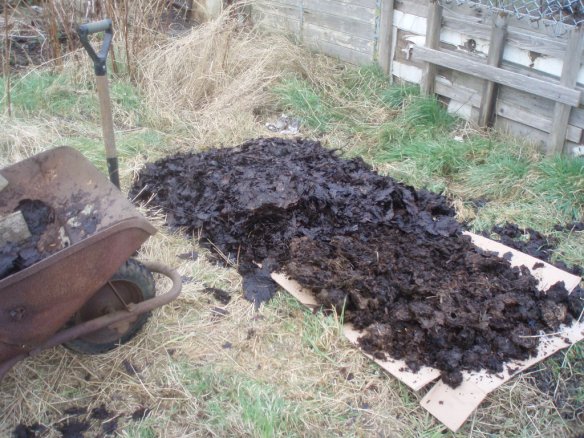 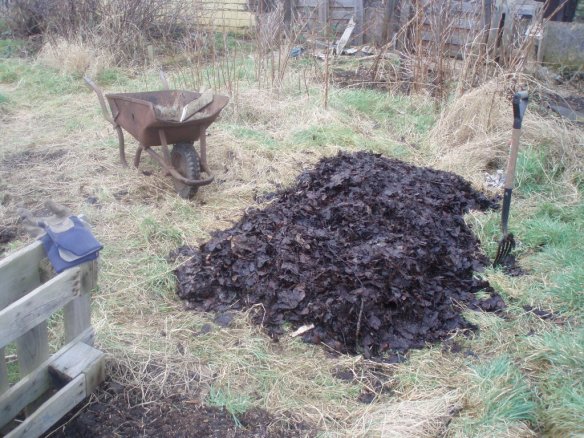 The start of a no-dig bed

Seems that google’s indexed better and I’ve been bumped to the second page of results for “permaculture edinburgh”, which allows some better stuff up front.

Federation of City Farms and Community Gardens, Scotland has recently had its national conference (Oct 2008). The 2007 conference report is on the website, so I expect there’ll be this year’s soon. That page has links to a map of 37 Community Gardens across Scotland, which includes Gorgie City Farm, Redhall, Bridgend, and the Thistle Community Wildlife Garden in Edinburgh.

I should get in touch with Gorgie City Farm Gardening services and get some hard and soft landscaping done in our front garden. Emma Burnett (ECBA) appears to work there as Garden Project Worker.

Bah! I can’t find an RSS feed for FEDAGA.

It was cold when I got to the plot and when cold blooded invertebrates appeared as I dug over the rhubarb bed, they just sat there with no energy. No wonder the birds were friendly! After half an hour the sun had warmed things up slightly, but I decided to work elsewhere and clear more of the path at the East side of the plot. Discovered a place that would work as a den, and found some honesty which I brought back home for the vase of dried stuff.

Sticking out of my pannier, the honesty shed a few seed pods but not as many as I feared. I would have thought that once the seeds were viable, a plant would want to shed the pods as soon as possible. Maybe it’s better to release the pods over a prolonged period, so the plant gets a chance to sample various conditions of wind and weather.

In other news: this blog rates highly on a google search for “permaculture edinburgh”. Surely there are better practitioners out there…

If I were to start listing resources in and around Edinburgh, it’d go like this

Was at the Leith permaculture introductory session today. Lots of good stuff: a selection of permaculture books and magazines; watched three sections of Bill Mollison – Global Gardener (Urban) and saw interesting stuff about city garden in NYC and the designed houses in Village Homes, Davis, CA; shared and recieved some good vegan food; chatted with lots of people and promoted EdinburghLETS; learnt a bit about 12V electrics.

Bloke from Aberdeenshire with a mandolin played us Tatties and Herring. Fantastic song I’d not heard before, obviously from the Aberdeenshire region as it’s singing the praises of lads from the North over the lowlanders and English, and there are namechecks of a number of places throughout the North-East. Thread on mudcat.

More than I will ever want to know about phytosanitary conditions for potatoes.

12V electrics often used in Kitchen lighting. Maybe there’s scope for putting a lot of it into the kitchen — obviously it won’t be all of the room since there’ll be an electric oven and a washing machine.
Gets me thinking … when we redo the room, what else can we incorporate to make it more efficient? I’ve still got a soft spot for a heat exchanger under the sink but I would have to do rough calculations as the to heat energy that’s available first.