After the worst year yet on the allotment, I’m giving up half the plot. Feeling a bit dejected about that but today I was there and looking at the half plot, and thinking that it’s a more manageable size.

The South side is the one with the shed I fixed earlier in the year, and has the best-developed beds. I’ve been moving as many plants as I can on to this side before the North side is reallocated but there are plenty of plants still on the North side that I’ll leave: an apple tree, a redcurrant, some Autumn raspberries. And today I had to make a decision. I’ve only got one bed clear on the South side and I had to choose whether to move some Summer raspberries or some rhubarb. I can’t imagine I’ll have another chance to prepare a bed and move the other before the plot is reallocated, hence decision time.

In the end it wasn’t a difficult decision: rhubarb comes up earlier in the year and there’s more bulk from the plant, so it’s a sensible decision. But I feel a little sad that I won’t have raspberries for the next couple of years until I sort my new half-plot out. There’s something so good about picking a couple of warm raspberries when down the allotment… That would have been the heart decision.

More on localised food production, but this time it’s the social and economic benefits that I’m concerned about…

Last year I bought some Summer-fruiting raspberries (Glen Ample) which I planted down the allotment. Bought 10 but realistically there’s only space for 7 in the plot, so I expected that a couple would not take and I’d be fine. But they all rooted successfully and have been growing well for a year, and I have 3 spare. Offered them to friends and then spent a couple of pleasurable hours yesterday morning transplanting the canes from the plot to their house. On the way out of the allotment, I also took 3 quick blackcurrant cuttings for them.

The rasps are on a nice South-West facing fence and I think they’ll do very well, and the blackcurrants will take a year to get established and then moved to their final position. Give it a couple of years and there should be a good crop of rasps and blackcurrants to complement their existing apple tree. Which reminds me: I got a cuppa and a bag of apples to take home — a nice gesture.

I’ve got a hunch that a mature fruit-producing garden, or any kind of productive garden, will add value to a house. Not found any research to back this up (I’ve not looked) but I did see some research from Portland, Oregon which indicates house prices rise when there are trees in the garden or on street. More research needed for the UK situation, I think.

Before I start my 5 minute hate, the good news: the first flowers on the strawberries are out and everything I’ve planted this year is coming along fine. But today, I saw my first potato leaf and that’s sent me off on one…

In the 3 years I’ve had this allotment I’ve not planted potatoes. I think they take up loads of space and are relatively cheap in the shops, so I’ve been concentrating on growing soft fruit and vegetables that are expensive, or don’t travel, or we didn’t get enough of in our organic veg box. So every year I’ve had potatoes springing up around the plot (and even managed to get a fair haul of potatoes) but I don’t want them! Half of them that I dig up are pink fir apple and these knobbly things have bits that break off readily.

Not sure that I can put the plants in any order of weediness. The first three are the most problematic.

Received word from the RBGE that I’ve passed the Certificate of Practical Horticulture with merit. Not only that, but because that was the first year the course was run and there were some teething problems with the course handbook etc., all the students have been offered a free place on a one-day course next year.

The course was enjoyable, the assessment day was fun and I’ve got something to show from it. However I won’t be able to make the award ceremony since I’m at Typography: thinking with type on that day.

This evening I headed to the allotment via Waitrose. I wanted to make Summer Pudding, so wanted to get some cream. The thought of the ride from Shandon to Morningside, through Craiglockhart Woods and to the allotment was also enticing. At the plot I picked redcurrants, raspberries, strawberries and blackcurrants and then headed home, getting there just before the rain came on.

Put the fruits in a pan with enough water to cover them, then boil for a couple of minutes. This will burst the skin and release the juice. Into a suitable receptacle (I used a glass tumbler), layer sliced white bread and the fruit mixture, keeping the bread very moist. Then pop it in the fridge for an hour, turn out and serve with goat cream. 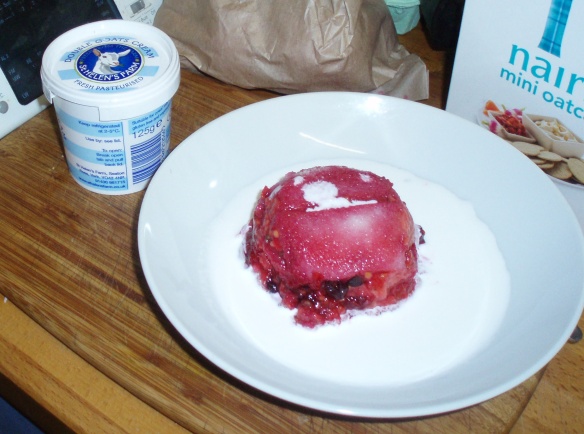 In other news: I’ve signed up for the four week long beginners course in Italian at IALS starting at the end of this month.

Felt contented last night. Went down the allotment straight after work and picked onions, broad beans and blackcurrants to bring home, and ate the first couple of raspberries (just to test!) and some alpine strawberries. Nearly a cornucopia…

Evening meal included onion tart. I’m not sure that Nigel Slater’s recipe even needs cheese when the onions are fresh and one uses the amount of butter he recommends.

The side dish: take young broad beans, podded but left in their inner skins, and blanch for a couple of minutes in boiling water. Put olive oil and a little chopped garlic in a bowl and throw in the drained beans. Grind black pepper on top and serve.

Plus carrot and tomato from the ECO box and green salad and the hardest avocado I’ve had ever tried to eat from ASDA.

I’d rather eat more self-grown food. I’m still learning about vegetable growing, but mostly it’s taking the time to grow and cook them that stops me. In a misguided attempt to help my employer, I’ve agreed to work an extra day per week. I get paid more, but I’m spending more: on childcare; on disposable nappies, because I don’t have the energy to wash and do real ones; on food, because I’m not preparing my lunch on the days I do work. It’s good for GDP but not good for me and my family.

Took an hour and a half to weed and spread manure on the bed for beans. Problem is: Super Aquadulce are very early broad beans and should be planted by the end of February. I thought I had next month as well! So, the modified plan is: plant 1/3 tomorrow, 1/3 at the end of February, and 1/3 a fortnight later.

Compared my raspberry canes with C’s. Unfavourably it turns out! Maybe I’ll plant some new canes at the end of this year and then dig up the current canes when the new ones have settled in. Not sure where thy should go; not down the West end of the plot, but I’ve got nowhere obvious in the middle or East end. Where the second compost bin is? I thought I was going to put in espalier apples along the North side of the plot, so that’s difficult.

Measured out the leek bed — that’s the next one for putting manure on. It only seemed large enough for 15 leeks at 9″ spacing. That’s an under-estimate, but I’ll probably extend the bed along another couple of feet and have enough space for a few more.

Monday evening, after N got back from work, I headed down the allotment for 2 hours. Finished picking the raspberries and bagged another half pound — that means that I’ve picked about 1.5 pounds over the season. Sad to see that there were so many wasted: fallen off, half-eaten, mouldy or shriveled. I reckon I could have picked twice as much again. There’s always next year … END_OF_DOCUMENT_TOKEN_TO_BE_REPLACED

Sat 14: a couple of hours, weeding and picking fruit. Inordinately happy to be picking fruit form the plot, although I’m learning how to do things for next year. Fed houseguests this weekend with a Scottish dessert consisting of raspberries and blackcurrants from the allotment, strawberries from Fife and ice cream from Orkney.

Tried to get rid of some slugs that were hanging round the courgettes. Still a bit squeamish about killing them, although I have a new-found respect as they’re tough to drown, with one particularly big one which kept climbing out of the plastic water container. I eventually chucked them in the river.

And there’s one French bean which is holding out. A small tendril is curling up the bamboo, so there may be a few beans this year.

Been to the allotment twice today. Got there at noon and has a mooch around, planted a second row of spinach, attended to the French beans, and got a barrowful of leafmould, but it was too hot and I had forgotten to bring any water. So at 1pm I headed home, had some lunch and headed out to Redhall walled garden, met A+J at the Water of Leith visitor centre and then pottered around the allotment again, mainly to plant a tiny lavender that I bought from Redhall.
END_OF_DOCUMENT_TOKEN_TO_BE_REPLACED

Took the daughter down the allotment in the buggy. Most of the time I carry her in a Mei Tei sling, although the folks from Redhall suggested I bring her down in a buggy so I can leave her safe while getting on with work. Not a bad idea, but the devil’s in the details…

In the last week Spring has sprung and the plants have grown like topsy so with her low to the ground and being pushed through the narrow allotment paths, the site has taken on a more sinister aspect. Nettles and sticky william grab at her legs, toxic rhubarb leaves poke through neighbours fences to within her reach: the allotment’s a death trap!