I just received this from the Shandon Local Food Group mailing list. What better way to celebrate the good weather than by getting some plants in the ground :)

*Other deliveries can be arranged at a reasonable cost, please just give us a call.

I’m going back to working 3 days a week from next week, and I’m intending to spend more time down the allotment. So I took the daughter down own the plot on Sunday, just to familiarise her with the place. It’s always instructive to actually see how she deals with it; no amount of theorising is as instructive as letting her get on with it in a controlled way.

The ground’s quite bumpy, even the main spine of the plot, and it’s raised higher than the beds. Every so often, she’d fall over and I’d see her head in a hollow and her legs sticking up. Not crying but obviously relieved when I picked her up, and she showed me her dirty hands and asked me to wipe both of them. When changing her nappy, I noticed three bruises down her left knee and a wee dod of blood. I feel so wretched; she’s fine.

Resolution: Gotta do some serious earth moving to level the paths and raise the beds.

Looks like I’ve got 6 beds for rotation this year. Four are ready. One has winter onions in, so it’s not going to be available until July. One still has to be dug over. Of these beds, three are big and 3 are small.

Not much, but it’s definitely blossom. The first stirrings of blossom are on the raspberries, and the blackcurrant bushes have little swellings underneath the flowers.

I really need to go to the allotment more often — it needs watering and weeding so I can make the most of this wonderful fruit.

Bought some 8′ canes for climbing French beans (blue lake) and took them down the allotment today. Also bought a rake; apart from a hoe, the gardening kit’s complete.

Still no blossom on the hawthorn — the first full moon after the first of May is tomorrow at 6:09am, so it’d better get blooming :)

In other news, lifeisland has a link to the EU federation of allotment gardens. Doesn’t seem to have much on the website, although one publication Allotment gardens — areas of discovery for children may prove interesting in the future. A quick skim shows it’s conference proceedings from 2004 and it concentrates on the positive aspects of allotments for primary school children to adolescents — nothing for infants.

On a cold day in February, I took my 9-month-old daughter to the site. The excitement I had on the way there was slightly muted when I saw the site. It wasn’t totally overgrown, and there were two sheds but there were also things I’d not bargained for: wooden pallets, broken and scattered around the plot; wierd brassicas that time forgot. 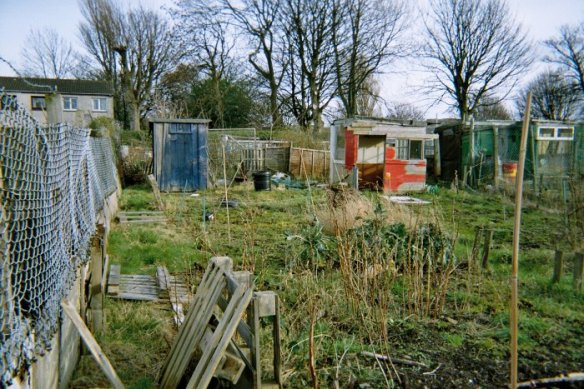