As we pass the Winter Solstice, I’m taking stock of what produce I have left from this growing season: one and a half jars of jam; 500g frozen blackcurrants; a kilo of frozen rhubarb; some frozen beans; and 3 small heads of garlic. That’s a crap shopping basket for Can’t cook won’t cook (cheers, Stephen)

Not much is going on down the allotment at the moment:

and the no-dig herb bed is looking sparse: 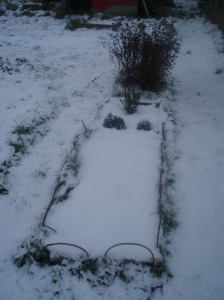 Some success from last year: a layered blackcurrant that’s now growing strongly and will be transplanted next Autumn.

Many of the other allotment holders have leeks and cabbage growing through to the New Year, and Winter onions and broad beans for early Summer. But rather than moan about what could have been, I should count my blessings: I still have an allotment, so many thanks to my neighbours and friends for helping out over the year. The daughter has also had a good time, and I’ve found out what peas look like when they’re growing.