Just back from the FEDAGA allotment show. It’s a great piece of organisation and over a hundred people turned up, and there was a great buzz in the hall.

This morning we had to set up the produce between 8am and 9am. If I’d had my bike it would have been simple, but trying to get across town by bus was a bit fraught and so I reached the community centre with 20 minutes to set up. I also had 7 categories of produce (which is up from the 3 categories I exhibited in last year) and that took more time to register…

Most of the other exhibitors were much higher quality so I didn’t expect to win anything, so I was pleasantly surprised to pick up a third place in the shallots. Am a little disappointed not to get anything form the (competitive) blackcurrant jam category because I think mine was quite delicious.

She who knits certainly showed that she can knit, and won the cup for handicrafts. Congratulations to her! And perhaps next year she’ll spend a little bit more time at the allotment helping out ;-) 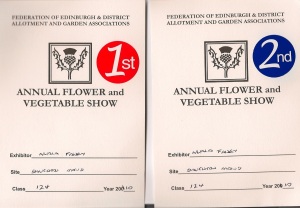